This breed on the whole, has been subject to some selection pressure for various production traits such as prolificacy and weight for age. Although scattered across much of the United States, most Spanish goats are located in Texas, and breeders in that state have been responsible for its improvement and recognition.
In the 1540s, Spanish voyagers first brought goats to the Caribbean, through Florida, and into Mississippi, Alabama, and Georgia. Goats were also brought into the west from Mexico to California and Texas. However not much emphasis was put on goat production at that time and they were not well managed. The goats survived well with this minimal management, adapted well to their regions, and natural selection produced a breed of goat that was an exceptionally well-adapted survivor. Many ranchers in Texas used these goats to clear brush to make better land for cattle and sheep.
The Spanish goat took a hit when the Angora goat was brought to the US. This was due to the fact that the mohair was a commodity that was in demand and the Angoras could clear the same brush. Thus many Spanish goats were crossed or processed for food to make way for the Angora. This changed in the 1960s when the market shifted. There was a decreased market for mohair and increased demand for meat. This was also helped by the improved transportation system making way to get the meat goats to the markets in demand and brought back the Spanish goats from the other areas of the US. With the new demand for goat meat brought another challenge to the Spanish goat.
In the 1980s Boer goats were becoming popular in other parts of the world and finally were imported to the US in the 1990s. This led to much crossbreeding. However there were some breeders that were happy with their resilient Spanish goats and didn't cross them. Many pure bloodlines still exist due to breeders that have kept closed herds. 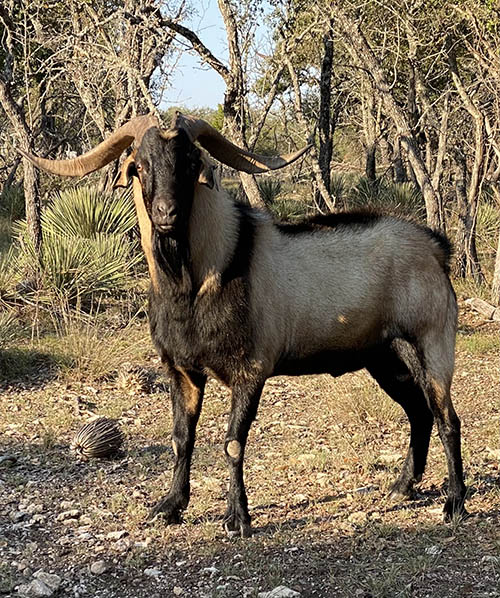 This breed has developed through natural selection from the goats that first came to the US. Survival of the fittest insured that the breed became hardy, good foragers, tolerant of difficult conditions and good mothers. Living in the wild gave an advantage to smaller stock because they needed less food. These goats have been referred to as "brush" goats in some regions because of their use in controlling brush. Some producers have improved the stock by selecting for better muscling, more milk or other criteria. These improved Spanish goats are larger and meatier than the average Spanish goat. In terms of productivity, there is a lot of variation in the growth rate of Spanish goats. Producers appreciate the Spanish goats for their toughness and ability to thrive with minimal care.

Spanish goats come in many colors and patterns. Colors vary widely, and no specific color indicates cross breeding. Nubian bucks have sometimes been crossed with them to improve size, milk production of dams and fleshiness of the kids. Their ears are somewhat pendulous but shorter than a Nubian's. Many of them produce a cashmere undercoat in winter. Boer bucks have been crossed with Spanish does especially in Texas.

Spanish goats are believed to be relatively tolerant of internal parasites. They are very active and can be considered flighty.

Physical traits can vary due to the different geographic regions they were kept and herds were isolated at times. The size and set of ears, horns, facial profile, weight, height, color, and degree of cashmere development in the winter are varying traits. Important traits included to the breed are adaptability, range utility, fertility, longevity, and temperament; although these are more difficult to measure and describe.

Spanish goats have straight to slightly convex facial profiles. The ears are medium sized and are usually carried horizontally forward along-side the head. Horns are usually large and long and in bucks the horns usually twist. Horns lacking twist can reveal swiss dairy breeding, smaller horns can reveal Boer, Nubian or Angora influences. Hair coats are usually short, but many grow profuse cashmere in the winter. Mature size varies widely depending on bloodline, as well as management and region. Low to moderate input management system females are generally from 70 up to 125 pounds and bucks are from 90 to 175 pounds. However, under different management systems mature size and weight will vary between 100 to 150 pounds for females and 200 to 350 pounds for males.