Most American breeders know that today's modernized breeds of Boer, Savanna and Kalahari Red all were developed in South Africa from the same lop-eared and multi-colored indigenous bush goats. With many of the same recessive genes running through all these breeds, it is no wonder that white Savannas sometimes have red or red-headed kids, traditional colored Boer goats may have red, white or spotted offspring, and a Kalahari Red can occasionally have a white or spotted kid. Decades of selective breeding have not been able to eliminate this trait and breeders should not be penalized when an offspring with untraditional color is born. On the rugged, harsh bush country where temperatures and rainfall can vary to a marked extent, natural selection played a big role in the development of these fertile, easy to care for, heat and drought resistant animals. The Savanna has excellent reproduction, muscular development, good bones and strong legs and hooves. Although usually these goats have white hair, they have been selected for totally black pigmented skin, horns, hooves and all bare skin areas to avoid injury by strong ultra-violet rays. 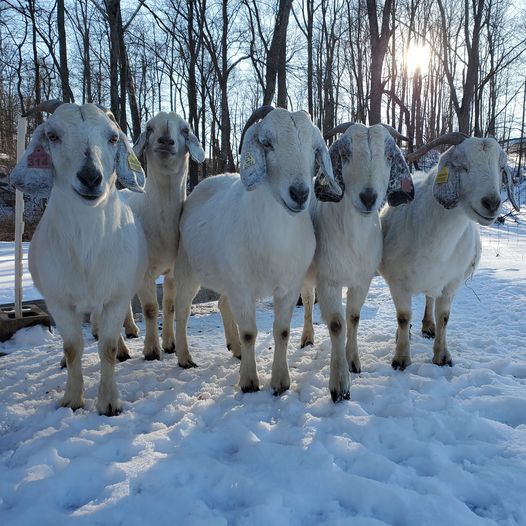 This breed on the whole, has been subject to some selection pressure for various production traits such as prolificacy and weight for age. Although scattered across much of the United States, most Spanish goats are located in Texas, and breeders in that state have been responsible for its improvement and recognition.
Some of the most closely watched and documented genetics in recent years has been the importation in 2010 of Savanna goats from Australia by Kenneth Mincey of Georgia. The four bucks and 17 young females were first-generation descendants of Savanna embryos (from three bucks and eight donor does) exported to Australia by leading South African breeders Koenie Kotze and Amie Scholtz.
This indirect method of getting South African-origin bloodlines into the U. S., via a 60-day quarantine in Australia with a subsequent 30-day quarantine in New York City, overcame the USDA embargo on direct importations of live Savannas or embryos. (The incoming genetic material had to be derived from "Australian animals" because the USDA recognizes Australia, but not South Africa, as a source country for approved stock for U.S. importation).
Embryos from these imported Savannas were implanted into Spanish recipient does. At kidding time, several red-headed offspring were recorded from these documented pure Savannas - which goes to show that no expense in time, labor and money can eliminate a possible off-colored Savanna.

Exotic animal dealer Jurgen Schulz imported the first Savanna goats into the United States from South Africa in 1994. A small group of Savanna goats was delivered to a Florida quarantine station and in early 1995 they went to a Texas ranch approved as a quarantine unit. On December 5, 1998, the surviving herd and offspring were sold through Schultz's Kifaru Exotics sale barn in Lampasas, Texas, to buyers from several states.


The second set of Savannas was imported by Canadian Boer pioneer Brian Payne's Keri-rose Farm, to Alberta, Canada. These Cillier embryo-derived, Canadian-born Savanna goats hit the ground in the spring of 2000.

The third source of Savanna genetic material imported from South Africa was through DNAfrica, an organization spearheaded by Johann Campher who set up representatives (DVMs) in Canada to sell Savanna embryos or descendants. Dennise Peterson of Hanford, Calif., as well as David Hagen of Minnesota, worked with the Canadian veterinarians to implant Savanna embryos. These animals arrived in California around 2002.
All of these genetics have produced red heads or other colors that do not meet current registries' breed standards for color despite many U.S. breeders' efforts to eliminate these occurrences by culling every red-headed or wrong-colored Savanna from their herds.
The original Savanna importers in the United States bred them to be an independent, low-input breed. and continued the hardy meat goat breed. They noted that the half Savanna kid got up faster after birth and nursed quicker than their other goats. They are excellent foragers and are able to grow rapidly with little supplemental food or nutrition. They are resistant to parasites and tolerate heat and cold well. The breed is a large framed, extremely well- muscled goat usually with white color containing a few black pigments found on the ears. The body characteristics resemble those of

the Boer goat. The breed is very adaptable and is successful on extensive grazing, as well as on intensive pastures. The Savanna is not a seasonal breeder, and mating can usually be done at a time that will ensure enough feed is available at kidding.


The Savanna goat is a highly fertile breed, and a high twinning rate is generally achieved, even under less-than-optimal conditions. The does have very good mothering ability, great milk production and produce fast-growing kids. Best of all, they require very little handling and care and often kid in the open. Savanna kids are noteworthy for getting up and nursing more quickly than other breeds. Savannas in meat production have a good growth rate and are an early- to medium-maturity type that produces carcasses with good confirmation.


Despite this independence and little need for human intervention, Savanna goats have a mellow temperament and are easier to handle than many other meat goat breeds. Because Savannas are specifically a low-input breed, they can thrive in climates with wide temperature and rainfall variations. They require little intervention once they have adapted to the local environment.


While well-intentioned, these attempts to cull for color while ignoring other obvious superior production traits in our small gene pool has caused what some call "genetic wastage". In other words, many good genetic traits (and good fullblood goats) were culled in the effort to eliminate a red head or offspring with no pigment - an endeavor at which South African Savanna breeders - with many years experience and thousands of goats from which to select - had failed to do.


We say stop the wastage. Superior fullblood production Savannas are too valuable to send to a second-tier registry or to the kill floor because they don't have the right hair color or pigment. The goal of the American Meat Goat Registry is to preserve and propagate the best genetics that the Savanna breed has to offer. Breeders may strive to have the ideal coloration of a "totally white goat with black skin, horns, point of nose, udder, sexual organs and hooves" - but AMGR does not believe an otherwise productive Savanna from a long line of ideally colored ancestors should be discriminated against if it does not meet this ideal coloration.

We agree with what South African Dr. Quentin Campbell, author of "Performance Testing and Adaptability of Boer Goats", had to say about breed standards:

"The adaptability of a sheep or a goat can be determined to a large extent by means of the following parameters: health, mortality, reproduction and mass gain...performance testing in actual fact also measures adaptability...Commercial and stud breeders should keep records of the productive traits of their ewes and should select for productivity and not for fancy points...should stud breeders persist in paying a lot of attention to split scrotums and the amount of red hair and spots which may be allowed...very little genetic improvement for economically important traits will be made."